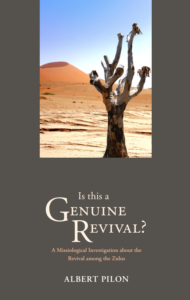 For fourteen long years Albert Pilon was one of the leaders of the Kwasizabantu Mission in the Netherlands. In 2002 he resigned from the leadership. Ultimately, having serious doubts about its theology of revival, he left the movement, determined to seek answers to his questions. Pilon immersed himself in Zulu culture and religion, researched existing theological studies of Kwasizabantu, consulted at length with theologians and experts on religious sects, and compiled newspaper articles and letters – in fact publications of all kinds – by Kwasizabantu and about Kwasizabantu. In addition, both in Europe and in South Africa he interviewed dozens of former members who had left the movement at various times. The testimonies of their experiences formed a coherent picture, fitting together like pieces of a jigsaw puzzle.
Besides innumerable cases of abuse of power, Pilon discovered various parallels between the teachings of Kwasizabantu and those of the independent indigenous churches, which are invariably influenced by traditional Zulu religion. In this book he presents a compelling account of his quest and a salutary insight into the true face of Kwasizabantu.